6 things to know before you buy an AR pistol 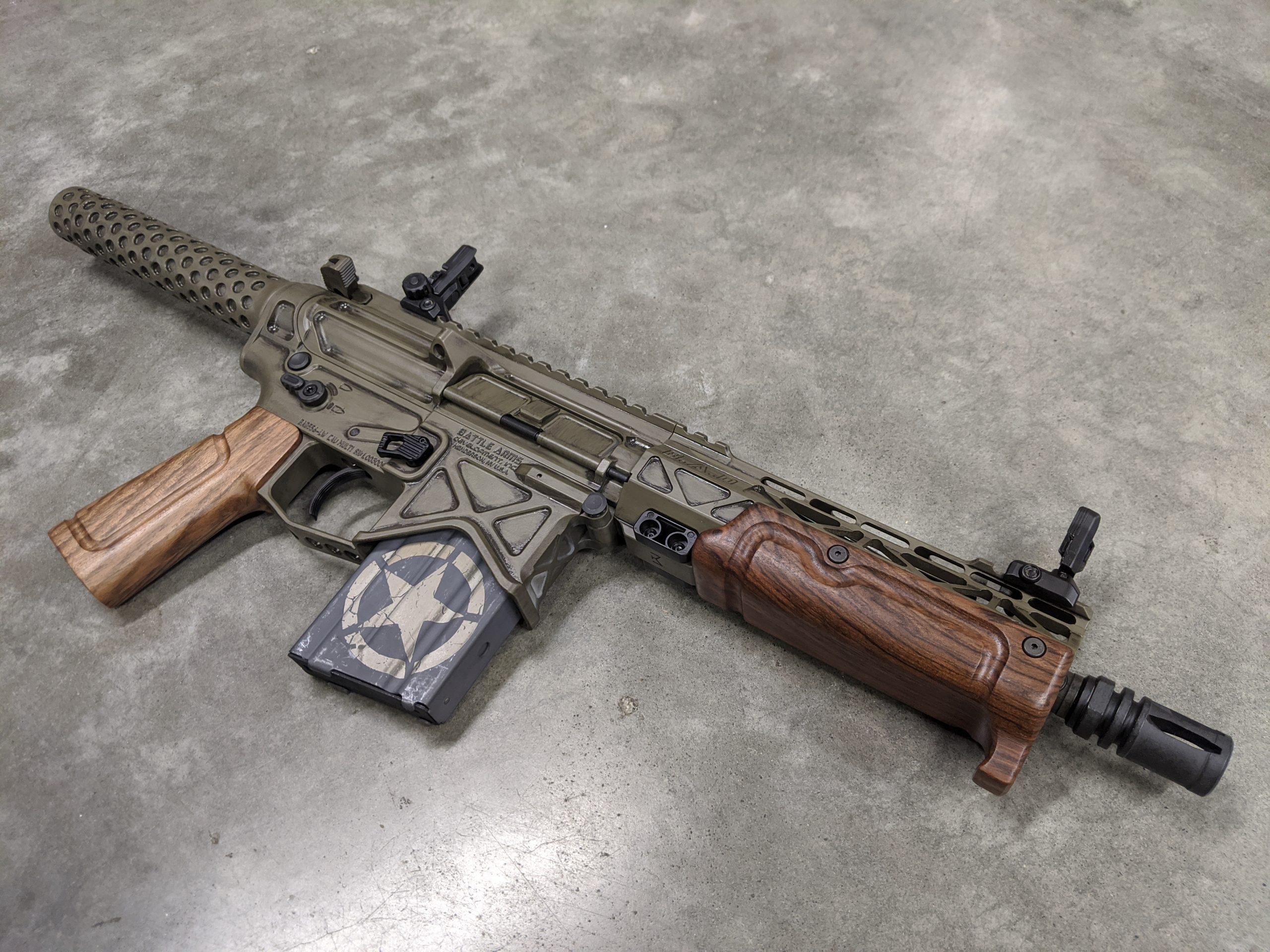 6 things to know before you buy an AR pistol

AR pistols are growing in popularity, and it’s no wonder: They are easy to shoot, easy to store, and endlessly modifiable. There are a lot of good reasons to put an AR pistol at the top of your shopping list, but there are also a lot of questions about the what and the why of AR pistols. We decided to tackle a few of the major things any firearms enthusiast - new or experienced - should know about AR pistols, and what makes them an ideal addition to almost any collection.

An AR Pistol is a firearm that utilizes many of the same parts as the popular AR-15 pattern rifles but falls under the ATF parameters to be a pistol. These guns are legal to own and shoot in most states, and require the same ATF paperwork as buying any other pistol.

There are several important notes about keeping your AR pistol legal. AR pistols cannot have a conventional rifle stock, they use a pistol brace that is designed to be strapped to the wrist so that the gun may be shot one-handed - this is the most prominent difference between an AR pistol and an SBR. The gun also needs to have a barrel less than 16 inches in length and be less than 26 inches in overall length. Another thing that new (and existing) AR pistol owners need to keep in mind is that you cannot legally attach a vertical foregrip to an AR pistol or any other handgun.

Here's what your need to know before purchasing an AR pistol.

They are easy to buy (in most states)

In most states, AR pistols fall under the same purchasing requirements as AR-pattern rifles, which often means passing a simple NICS background check when picking one up from your local FFL. In some states, like here in Washington, there are different requirements for different firearms, which can change the background check process and often make AR pistols easier or quicker to acquire than AR-style rifles. For example, here in Washington State, since AR pistols are considered handguns they don’t have the same 10 business day mandatory wait and training requirements necessary to buy a semi-automatic rifle.

You also have the option to buy a lower receiver and build an AR pistol on it. In some states, this may be an easier purchasing process than buying a completed firearm. It’s important to know your state, county, and city laws - the easiest way to make sure you’re up-to-date on local firearm laws is to check with the nearest FFL.

They are easy to store and easy to shoot

Being able to safely store a firearm is an important part of being a responsible gun owner. Since AR pistols are more compact than full-fledged AR rifles they can be easier to safely store, especially for those who may be low on space or want something that they can more easily travel with. Bulky rifle cases and safes can be difficult to manage for those who are low on space in their home, have a smaller vehicle, or travel with a lot of gear when headed to the range. An AR pistol is just easier to manage in commuting and even shooting situations because of its smaller size.

The smaller size also makes the firearm more maneuverable in close quarter situations, which makes it better for home defense. AR pistols are also easy to shoot: they have low recoil and the same controls as an AR-style rifle, making them an excellent learning tool for new shooters or those who just want to be able to train more. The combination of ease of use and ease of storage is a huge draw for the AR pistol since this kind of versatility is difficult to find in the world of firearms.

For some, one other benefit of the size is the lighter front-end weight. AR rifles with long barrels can be tedious to hold up over long periods of time for those who are smaller-framed, have less developed arm muscles, or even suffer from some kind of disability. The lighter and more compact AR pistol is a great way for all shooters to get the benefits of training without what may be the strain of working with a larger, heavier firearm.

You can choose whether you buy it or build it

One of the fun parts about purchasing an AR pistol is choosing whether you want to buy or build one. Some people will tell you one or another is cheaper, but the truth is the price is less of a factor than personal preference. Some people prefer to learn the intricacies of how their firearm works, have more control over the components in their AR pistol, and build something from the ground up while others want to buy something completed and go from there. Buying a completed firearm is a lot simpler, and there are a lot of quality, completed AR pistols on the market to choose from in a variety of budgets.

For those who choose to build rather than buy, it’s important to do the proper research and make sure your parts are compatible. Fortunately, once you’ve chosen a caliber to build your AR pistol in, many of the parts are interchangeable - another benefit of opting to build your pistol in either 5.56 or 9mm. When choosing parts for a build, finding quality parts from quality manufacturers will go a long way to ensuring proper fit and long-term reliability.

While choosing to purchase a completed AR pistol is more straightforward than opting to build one, there are still a lot of options available. The first thing to consider is of course budget, but regardless of what you want to spend, buying from a quality manufacturer is important. There are budget-friendly AR pistols available from quality manufacturers for under $1,000. On the other end of the spectrum, you have items like the Battle Arms Development Tanker Pistol, which features everything from custom cerakote to Grade A Walnut and retails for $3,449.99.

There is a wide variety of calibers available

There are a wide variety of caliber options available for AR pistols. Which for a lot of people means selecting one that is commonly available and affordable. The most popular calibers of ammunition on the market are 5.56 and 9mm, and AR pistols are available in both. Finding an AR pistol that uses one of these two calibers will also make it more affordable to train with, open up a wide variety of parts available for your firearm, and allow you to use magazines that may also be used in other popular firearms.

AR pistols are also available in other popular calibers. For more advanced shooters there may be ballistic reasons, or even just personal preferences, for different calibers, and the AR pistol can certainly cater to those wants. Because there are so many calibers available it’s important for people who are building or modifying their AR pistol to read product descriptions closely and do the proper research to ensure that the product they’re looking at will work on their gun.

The parts are interchangeable

There are a lot of parts available for AR-style firearms from a lot of different manufacturers. One of the benefits of purchasing a firearm in this style is the variety and interchangeability of these parts. It’s easy to build your firearm to the specifications you want and, if you don’t like something, it’s equally easy to change it.

Just like with different caliber firearms, it’s also important to research different products to make sure they are compatible. A lot of times this just comes down to making sure sizing measures up, especially when working with the gas system.

At the end of the day, the AR pistol is a versatile and easy-to-use firearm that can be configured to specific preferences or bought off-the-rack in a manufacturer’s preferred configuration. Their versatility and ease of use make them an endlessly useful tool for a wide variety of firearms enthusiasts and professionals.

by rainierblog
Posted in: Buyers guide
0 comments
Comments
Leave your comment
Your email address will not be published